After a couple of days break due to soggy weather, I got back to the garage today. I started to carry on with the underside, specifically the drivers footwell area. I got held up straight away, however, when I found a rust hole. 🙁 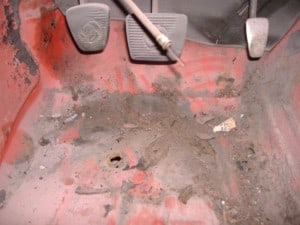 Either I missed it when I cleaned up the first time around, or I just forgot it was there.
Nothing too major, but it needed sorting. So out came the scraper and blowtorch: 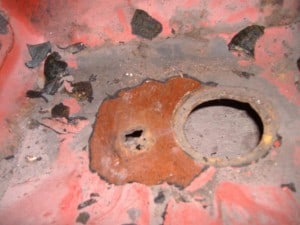 Followed by the angle grinder: 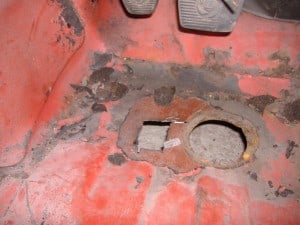 I decided to do this as a butt weld, as I didn’t want a big patch plate on the underside, and I had a feeling if I put the plate on top I’d be able to feel the lump underfoot while driving. So a bit of careful shaping and welding later: 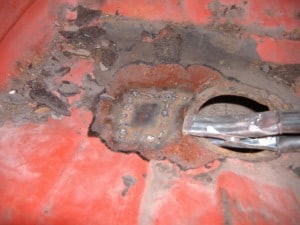 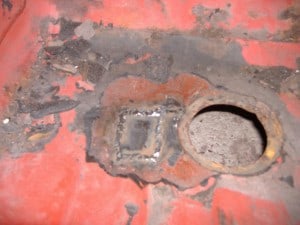 Job done. It doesn’t look wonderful, but it doesn’t have to. It’s a smooth even repair (from both sides), and it’ll be covered over in the end anyway. So job done!

It was a bit of a landmark for me, I found the hole and just took it in my stride and got on with the work. Time taken to complete the job, including scraping off all the sound pad: Less than an hour! I guess I’m getting used to this welding thing. 🙂

After that I finished prepping the underside – I didn’t get time to do the spare wheel bit, that’s a job for tomorrow (weather permitting).

One thing I did do was start sorting out the seatbelt mount that I cut out previously – I’ve welded new metal into the wheel but there’s no mounting hole. The original design is a nut welded to a strip of metal, which is then welded to the underside of the wheelarch. That had all rusted away. I was going to find a new nut to weld in place, but a quick poke around at work showed it might be tricky to get hold of the proper sized (UNF) nut. So the easiest option looked to be to switch to a metric thread.

No need, however: I had a look at what I’d cut out before: 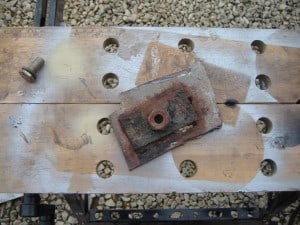 Although the wheelarch bit was rusty, the plate and the nut were fine. So I ground off all the rusty metal and cleaned it all up: 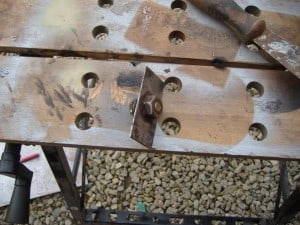 Ready to go back on now. I just need to nip out tomorrow and get a big enough drill bit, then that can be finished.

My POR stuff has also arrived, so hopefully I’ll be able to get started on that next week (no work this weekend, I’m away!).