Now I’ve got all the welding gear together, I thought it was time to get on and have a go.
So last weekend, I took everything down to the garage, including some scrap metal (an old computer case I’d liberated from work) plugged everything in, and hoped. I should point out at this stage that I’d taken a bit of a chance that the generator would cope with the power draw from the welder – I certainly had no guarantee that it would work! So needless to say, I was quite relieved when it all worked. That was an expensive gamble, which would have left me with several hundred pounds worth of useless equipment if it hadn’t worked!

After a bit of practice, I managed to start getting some halfway reasonable welds going: 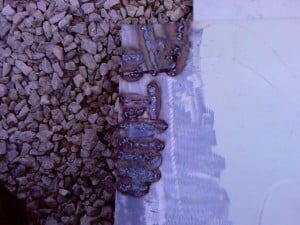 The next day I had a play around a bit more with different wire speeds, and am now getting some better penetration. It’s still not perfect, but I think I’m about ready to start on the car – which I’ll be doing as soon as I can get some decent weather!

Over the last week, I’ve been doing a little bit of shopping, on ebay and elsewhere – mostly stuff for the upcoming bodywork jobs, but I did win a couple of interesting bits on ebay: 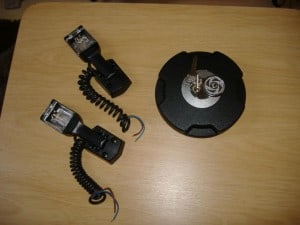 A set of two map lights, both NOS and in perfect condition, and a locking petrol cap, also NOS. The petrol cap is an interesting one – until I saw the auction, I had no idea that these were even available! Obviously it’s an aftermarket item rather than original BL, but pretty rare by now I should think. It’ll make me feel a bit better about security, at any rate – I never did like the fact that anyone could just open up my fuel tank and dump whatever they fancied in there!