….it’s been a while.
In my defence, I’ve been extremely busy of late, what with one thing and another – and what with the cold weather and dark evenings, I just haven’t had any time to devote to the car.

However, I’m back on the case now, and ready to get started again.

The last time I did any work on the car, I’d got to the point where most of the paint under the car had been removed. Obviously, it’s not ideal to leave a car stripped to bare metal in a cold garage over winter, but fortunately the car doesn’t seem to have been affected too much – a light coating of surface rust in a few places, nothing that can’t be rubbed down in a couple of hours.
One of the other reasons I halted the work was because I’d got to the point where I needed to do some welding. As I didn’t have a welder, or any means to power it, or indeed any idea how to use a welder, this was a bit of a problem. However, I’ve been doing a bit of shopping recently, and am now the proud owner of a 6.5Kva generator and a Clarke 135TE mig welder. All I need to do now is work out how to use it! 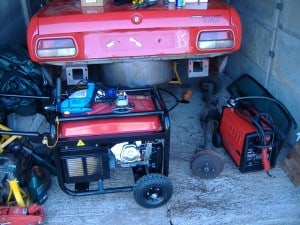 Weather permitting, I’ll be at the garage this weekend with a few sheets of scrap metal, and I’ll be getting some practice in before I unleash my ‘skills’ on the car itself. Should be fun!

In the meantime, I’ve started stripping out the interior. I’ve done this for two reasons – firstly, I need to get a lot of the trim parts out of the way (including the dashboard, more on that in a bit) for the welding, and secondly, the interior trim is way past its best, and I want to get all that cleaned up and/or replaced as part of the resto. So it’s all come out, and due to lack of space in the garage, I’ve brought it all home. As a result, the back of my bedroom looks like this: 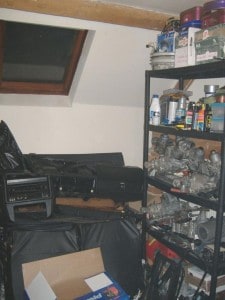 Once I’d pulled the interior out, two things became obvious:
Firstly, although there was no rust or cracking I could see in the usual areas behind the seats, the windscreen frame is worse than I thought. Not only has the rust around the bottom gone right through to the inside, but it’s also taking hold of the ‘A’ pillars as well. This is not good. 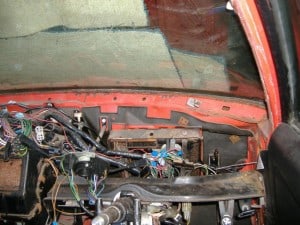 Secondly, after several PO bodges (check out all the scotchloks!), I think a new wiring loom would be a good idea – probably a sensible plan anyway, given the age of it. They cost about £95 or so, not as much as I was expecting (how often do you hear that?!), so it’s a reasonable investment. I’ll need to modify it slightly of course, for things like a proper stereo socket, and also to adapt the loom to the fascia (It’s a late fascia in an early car, which means lots of oddities such as the coolant light coming on when I run low on fuel, and the seatbelt light coming on when I put the handbrake on).
I’ve spent the last evening playing about with the fascia and instruments – in spite of a couple of small bodges, it’s all fine and just needed the contacts cleaning up. The clock, of course, is another matter – but more on that at a later date!

Things to think about:

The repairs on the windscreen frame will more than likely end up requiring repainting in that area – bearing in mind a few rust bubbles here and there, plus the fact I need a new front wing and a new bonnet, should I consider going wild with the body repairs and budgeting for a full respray?
Being an early model, I have no intermittent wipers – while I’m hacking the loom apart anyway, maybe I should think about installing something like this: http://www.techlib.com/files/wiperkik.pdf
The rear parcel shelf: All the original ones are pretty knackered by now (mine certainly is), and I’ve heard the GRP replacements don’t look that good – I think I might design some sort of a custom fitting….