Work continued on the frame today. I didn’t get as much as I’d hoped done, partly because the brand new angle grinder, bought to replace the old one which packed up, packed up. I was cutting a seam out when it started smoking, got suddenly really hot and then stopped working. So I had to pack up, drive to the other side of town and get it replaced, then drive back and start again. Not happy – I’d bought a cheap one as I didn’t need it to last too much longer, but I was hoping for more than a day’s use out of it! Obviously buying cheap is a false economy, so I paid a bit more (twice as much!) and got the same model I had before, at least I know that should last the distance with no problems.

So, back on with the work:

With the bits on the car ready to go, I started cutting out the bits of the donor frame I won’t be needing. That took a while, there’s some surprisingly strong spot welds on the frame, and lots of them.

I got it all off in the end though: 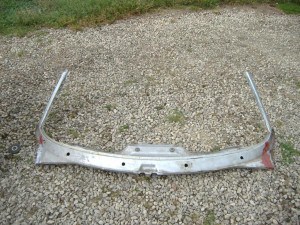 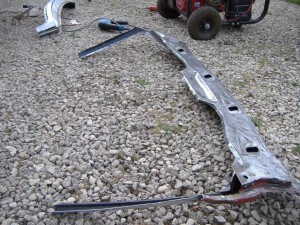 Then it was ready for a trial fit to the car. Not that I was expecting it to, but it didn’t fit first time, not by a long shot! It took half the afternoon of fettling (read: hitting stuff with a hammer and grinding bits down) before I had it fitted the way I wanted it. I’m happy with it now though: 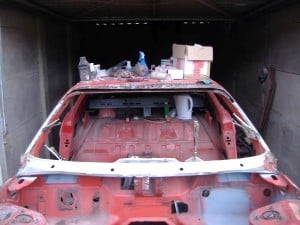 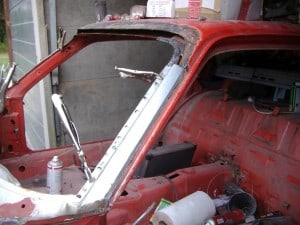 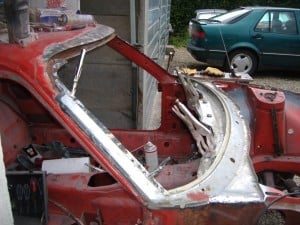 Now I just need to redo the welding on the edges of the base (someone had welded bits to the edges, not particularly neatly so I cut it off again) and prime the underside, then it’s ready to fit properly.

Before I do that though, I need to get on with the top of the frame and get that fixed in place, before putting the old windscreen in place to check for fit. Once I’m happy with that, the welding can start – I think about eighty or so spot welds, plus about ten feet of seam welding that has to end up being invisible!