After being busy with some other projects (mainly dealing with various problems with the other cars in the fleet), I got back on to the wing prep today.

I started by putting the wing back on, this time with the bolts all in place. Everything lines up well, apart from a couple of issues:

Firstly, although the panel fits up against the door well enough (it sits flush, swage line matches up and so on), the top of the door doesn’t line up properly with the top of the wing: 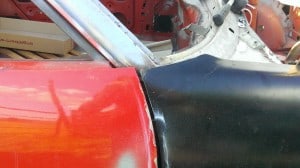 I’m not sure what’s going on there, or what I can do about it. Literally everything else lines up, and I can’t lift the wing any higher than it already is – even if I could, that would mean that the swage line wouldn’t line up. I get the feeling this is to do with the fact that the wing pattern is for the later cars, whereas the door is the original 1976 design – maybe there’s a difference there? I may end up getting a new door – this one is a bit rusty along the bottom – so that may well solve that issue.

The other area of concern is the front edge – although it lines up with everything fine, the shape is slightly different to the edge of the front panel: 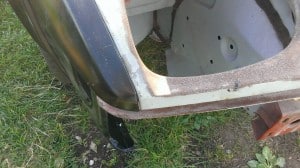 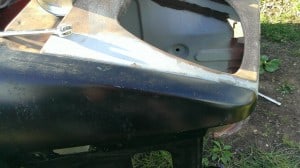 I’m hoping that once I’ve got the wing secured and in place I’ll be able to do a little bit of panel beating to get things lined up better. Short of getting a new front panel that matches, there’s not a lot else I can do.

Anyway, once I was happy with the fit, I rubbed down the paint on the areas to be welded, along with priming and painting a couple of areas that I won’t be able to get to properly once I’ve fitted the wing: 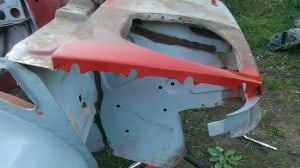 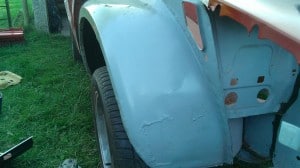 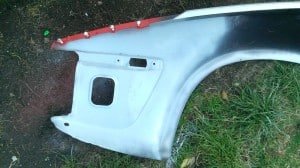 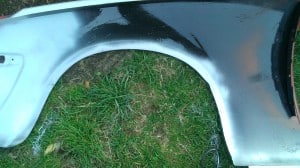 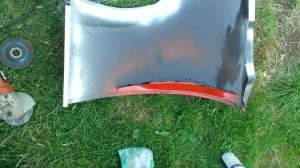 There are some bits on the front of the inner wing that I want painted in body colour, so I painted those areas with POR-15 etch primer, which is designed to go over the top of the POR-15, ready for painting over.

So that’s everything now ready – I just need to get a couple of drill bits and then I can get the wing finally welded on this weekend!