Recently I’ve been having problems getting somewhere to work on the car, meaning major jobs have been out of the question.

Where I work there is an old shed where the roof collapsed, and is now derelict. So I got permission, and am now free to use it for my work. It’s not ideal – there’s no power, water, or even a roof! But there’s plenty of space, it’s out of the way, and it’s free, so it would be churlish of me to complain too much. 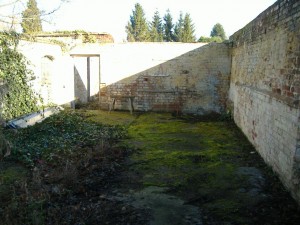 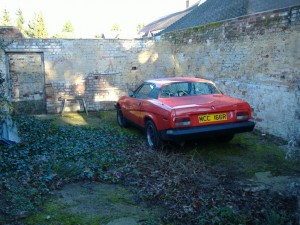 So, on with the work.

As per my last post, I needed to change the wheel bearings and steering rack gaiters, so with all the parts to hand, off I went.

Taking the hubs off revealed a couple of surprises – firstly, the front brakes are in a right old state, the pistons are stiff, the pads are nearly worn out and the discs are pretty worn, too. I knew they weren’t great, but I didn’t realise they were that bad! I know it’s a bit iffy, but the brakes do actually work reasonably well even in this state, so I’ll be leaving them for now and sorting them out properly another time – sooner, rather than later…

Secondly, the reason I was changing the bearings was because of excessive play on the front wheels, which I put down to worn bearings. When I went to undo the hub nuts, however, I realised why there was play – the nuts were only finger-tight! Remarkably enough, the bearings were still in virtually new condition, so I’ll be keeping them for emergency spares.

The steering rack gaiters were a little bit less straightforward though: the track rod ends were seized solid (had they ever been undone?) on both sides. Fortunately, I’d planned to replace them both, so I showed them no mercy when taking them off – suffice to say, they’re now in no fit state to go anywhere other than the bin!
And the gaiters I’d bought (from ebay) were wrong too; one end was fine, but the other end was way too small to fit. Great. A little bit of handiwork with a knife, and they now fit just fine. It’s a little bit ‘Heath Robinson’, but they should be fine – I’ll just have to keep an eye on them.

Before I’d had the chance to get the hubs back together it was getting dark, so I’ll be carrying on tomorrow.