Work towards getting the rear end done (until stripping and prepping for the respray) is now well under way.

I finished the last of the filling this evening (the seatbelt mount point where I had to weld in a patch – I wish I’d remembered to do that before I put the rear deck back on!), and I’ve etch primed all the bare metal in the area, apart from the wheelarches (which need masking first).
It’s all looking pretty good, I’m happy with the work there.
I also made a start putting the rear suspension back together – I’m reusing the old bits for now, no point in putting anything new and shiny on just yet.
I’d picked up a pair of trailing arms and A/R bar off ebay a few weeks back as the ones I took off had been stripped and painted previously. It’s rusty and mucky, but good enough after a going over with the wire brush. Then I dug out the old springs, dampers and a pair of old tie bars (No idea where they came from, but I seem to have gained a spare pair somewhere along the line). All got the wire brush treatment: 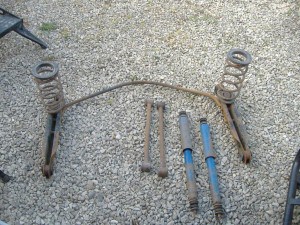 Before installing them on the car: 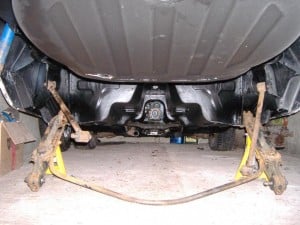 That view reminded me of a picture I took right at the start of the project: 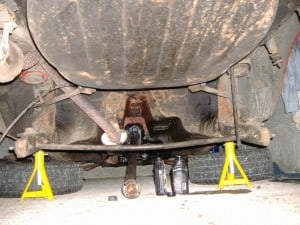 It’s good to see a strong difference, although it doesn’t do justice to the amount of work put into it!

When I got home, I (with help from my better half) dragged the axle down from out of the loft – I don’t know how we got it up there in the first place, it weighs a ton! That’s all in the back of my car now, ready to take to the garage tomorrow for reassembly and installation. Again, it’s not the one I’ll be using in the end, but it’s a temporary fit so I can get her back on her wheels again. When the time (and money!) comes, I’ll be getting a refurbed 2.84:1 unit to fit.

Last job for tonight was to have a quick look at the boot lid. It’s in great condition generally, the only issue being the numberplate lamps. It looks like when the car was sprayed by a PO, they never even bothered to mask the lamps, so they’re covered in paint, and scratched to bits where the paint has been rubbed off. Fortunately you can get new ones now, so these ones are going in the bin. 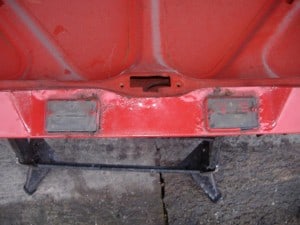 There was also a bit of rust around the lamp mountings: 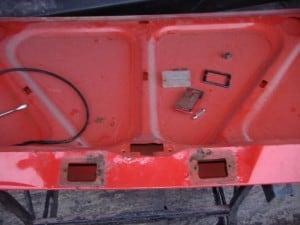 But not enough to be worried about, that can just be ground off.

So tomorrow, I’ll be:
Doing some final painting
Assembling and fitting the rear axle
Refitting the bootlid
Moving the axle stands so I can paint the chassis on the bits where they’ve been

Then I just need to get some air in the tyres, refit them and then she’s ready to put back on the ground and pull out of the garage. I’m away most of the weekend so I’ll most likely be doing that on Monday. My only worry is that the front brakes are seized after all this time – they shouldn’t be too hard to free up if they are, but with the space I have to work with that could end up being an awkward job.

Exciting times ahead, although I’m dreading what I might find at the front!

On an unrelated note, it seems that Google likes this blog at the moment: 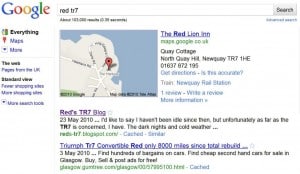 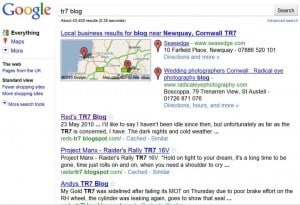