The welding work is now more or less complete around the lower parts of the car now.
Of course, there’s still the new panels to weld in, but as far as patching up the rusty stuff is concerned, there’s just the windscreen to do (talk about saving the best till last!)
This week was mainly about the small fiddly bits in the floors, there were a couple of small holes here and there that needed attention: 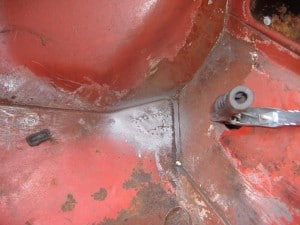 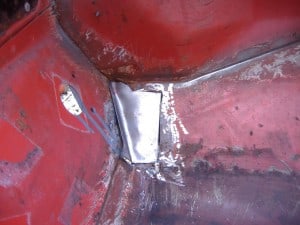 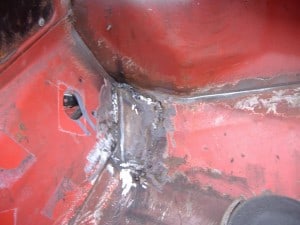 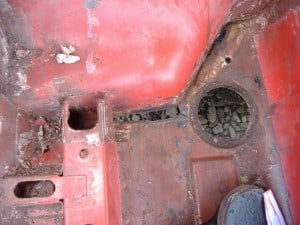 All done now, the interior is ready for cleaning up and painting.

I also tackled the sill, not the prettiest of work but plenty strong enough: 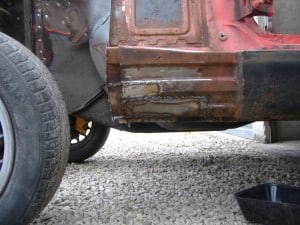 That turned out to be a fiddly job, there’s four different panels in there!

After all that was done, I turned my attention to the front end. First job was to remove the lower (spoiler) panel. Rust-wise it isn’t too bad, but it’s clearly taken a couple of knocks in its time so I think I’ll buy a new one rather than try and beat this one back into shape (a tricky job as I don’t know exactly what shape it’s supposed to be!).
It came off fairly easily, apart from the wings it’s only held on by about six spot welds, and two of those were broken!
The accident damage had buckled the brackets slightly, but two minutes with a hammer took care of that. I did find that the middle bracket was bent too much and had weakened, so I removed it – it won’t be too hard to fabricate a new one.

With that done, I took a look at the front panel. I started by stripping the paint off the edges to check for rust. I didn’t find any (for once!) but I did find yet another filler bodge: 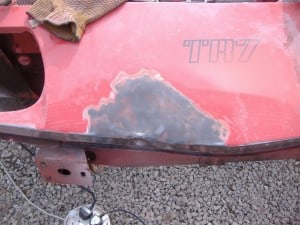 A small dent from another accident. You can’t see it on the picture, but the top area (most of the bare metal area) was also dented in. Nothing major, but once again the restorer had elected to just fill in the dent rather than repair it. So, another half inch deep wad of filler!

I’ve made a start knocking it back out – a little tricky as the dent kept popping out and bulging too far. A bit of work with a hammer and dolly and it’s nearly there though – it’ll still need some filler by the time I’m finished, but that should be just a light skim rather than half a tin of the stuff. 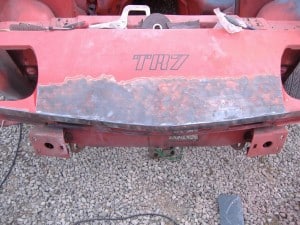 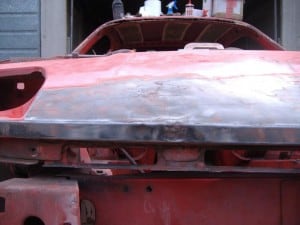 The channel where the plastic grille sits was also a bit buckled in places, nothing drastic and it’s all straightened out now.

The underside was predictably covered in surface rust: 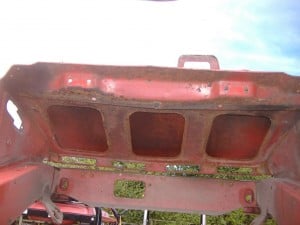 Nothing serious though, it just needs a bit of work with the wire wheel and repainting.
I made a start on that, but then my angle grinder started coming apart! It looks like the vibrations are shaking the screws loose, I didn’t notice until the guard fell off halfway through using it. I’ve lost two screws (one of the many downsides to working on a gravel surface) which I need to replace before I can carry on with that.

It’s all going well I think, still a lot to do but I’m feeling like I’m on the home straight as far as getting rid of the rotten stuff is concerned.