I did a whole load more stripping this weekend: 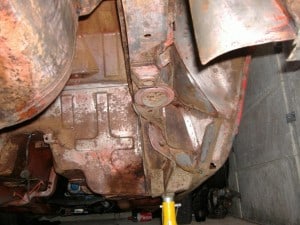 It’s surprising how much surface rust there was hiding underneath the paintwork – or maybe not, it is a Speke car after all!
Either way, it looks like I caught it just in time. It’s all surface rust, with none of it looking in any danger of rotting through. Given another year or so, it could have been a different story though.

Strangely, there seems to be three different types of paint under my car – there’s the normal stuff in body colour (pimento, if you were wondering), which comes off nice and easily. Then there’s some other red paint – this stuff is a darker shade, almost a vermillion colour. This is strange stuff – it doesn’t blister when you put stripper on it like you’d expect, and doesn’t scrape off easily. I found a wire brush was best for getting that off. The third type is a rubbery black stuff. I don’t know what it is (some sort of chassis paint?), but it’s a right pain to get off! It doesn’t react to the stripper much beyond softening up slightly – this stuff took me ages to get rid of. Fortunately, it seems to be mostly around the back end of the car, and I’ve got it all off now.

So far, I’ve done most of the rear end up to the rear bulkhead. This is really the worst part of it out of the way – as I found with the underseal, the wheelarches and chassis legs create all sorts of nooks and crannies that are almost impossible to get to with anything much larger than a screwdriver. Compared to this, the flat areas under the cabin are blissfully easy to do.

I do need to go over a few bits again though – like I said last week, I need to go over some tight corners with some wire wool. In the end, today I ran out of paintstripper, I left it too late to go to the shop to get more (Stupid Sunday trading hours!), and my wire brushes are now all knackered – this job is pretty hard on wire brushes, I’ve gone through four so far!

So time to call it a day, but all in all, I finally feel like I’m getting somewhere now.