So it’s taken over three years, but I’ve finally got the wing fitted today, ready for welding.

I was going to get this done the other day but my angle grinder decided to die on me. I think that’s the third one to die now? Four if you count the cheap one I bought that lasted about an hour. I guess I’m quite hard on these grinders!
I did look at repairing it, it looked like the bearing on the spindle was worn, but it turns out a new one costs more than a whole new grinder does! I looked at getting a refurbed one of the same model, but soon discovered that I could get a brand new one of the updated model for the same money. So, armed with some Christmas money (thanks mum!) I ordered myself a shiny new grinder (Black and Decker KG115A5, if you’re interested). It’s more or less the same as the old one, except it’s got a nifty ‘soft start’ feature which means it doesn’t try to jump out of your hands when you turn it on. Hopefully this one will last until I get all the bodywork and painting done!

After a bit of work this afternoon, my grinder is now no longer shiny, but I had all the welding surfaces ground down to bare metal, holes drilled for the plug welds, paint applied where necessary and I was all ready for the final fitting. 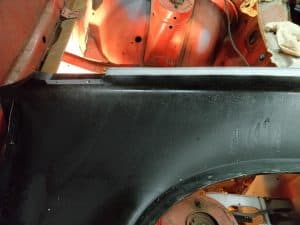 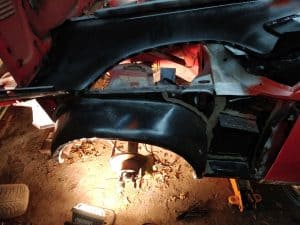 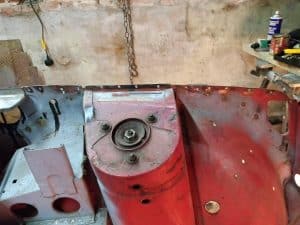 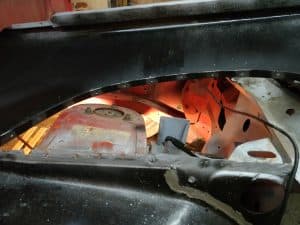 I painted the inside of the wing the other day with some POR-15 I found unopened on a shelf. I don’t know if it’s because it’s an old tin or because it was not much above freezing when I painted it, but it hasn’t come out well – all streaky and dull. It looks like it’s adhered alright so shouldn’t be a problem and I’m certainly not worried about how it looks – it’s never going to be seen again, it’s just there for protection. Still, I’ll wait for warmer weather before I try using it again and if it still comes out the same I’ll throw it away and get some new paint.

With that all done, I got the wing fitted into place. It took me about half an hour until I was happy with the fit  – it’s a swine to get everything lined up at once, and the poor fit of the wheelarch doesn’t help. With that done, I got the bolts on and tightened and put on a couple of tack welds to hold it in place. That’s all I can do for now, I’m waiting for some new welding gas to arrive before I can do the welding properly in a couple of days.

With that all done, I put the bonnet down to check for fit. 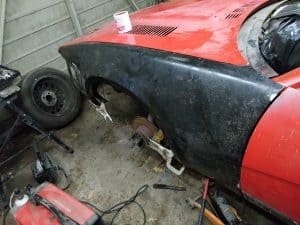 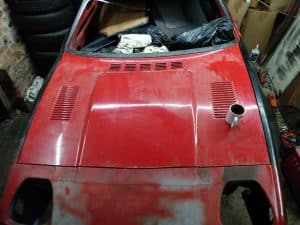 Once I’ve got the welding done, then I’ll be taking the suspension and subframe off and painting the wheelarches and underneath the front panel.