So, here we are again. After six years at the old house and very little TR7 progress, we moved the whole lot again, this time to Norfolk.

We’ve actually been here since March, but with one thing and another (I’ve still been working my old job in the Midlands and have been staying up there during the week), I haven’t had much time to do anything with Rosie until now – I just got her here on the transporter, rolled her into the new garage, piled said garage up with junk and left it. Now I’ve got more time, plus a desire to get back to work on her, I’ve sorted out the garage and got to work.

Speaking of the garage, it’s an unusual one. It’s part of a quite old building (older than the house itself), I’m guessing it used to be a barn or stables or some such thing. It’s all a bit uneven and ‘rustic’, and I really love it. Most importantly, it’s got lights and power, and as it’s not a normal garage (it’s about 8 feet wide, so a bit bigger than a standard garage), there’s *just* enough room in there for me to be able to work inside the garage – this means that I no longer need to wheel her out to work on her, and that means that I can go out and work whatever the weather or even if it’s dark outside!

Another plus point is that there’s enough room around the place now that I can just walk into the garage and pick up from where I left off – at the old place the garage was shared with a whole load of other stuff, so I’d have to spend five minutes moving stuff out of the way before I could even get to the car – then another five minutes afterward putting everything away again. It’s a small difference, but an important one.

Although it’s a massive improvement over what I’ve had before (remember, the first garage – where I did the majority of the work – didn’t even have any power and I had to use a generator), it’s not quite perfect.

As you can see, I’ve got all the boxes and parts in the garage now, as well as some parts for other cars, which makes space a little tight. It’s OK as long as I can keep tidy – not something I’m all that great at though! 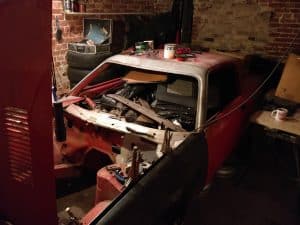 The lighting, while I’m happy to have it, isn’t really great – at the moment it’s just one overhead bulb plus the remains of a broken table lamp that I’m using as a work light. That leaves a lot of shadows and dark areas. Similarly, while there’s power in the garage it’s just a socket on one side (the wrong side, at the moment!). I’ve hooked an extension reel over the rafter for now, but it’s not ideal. 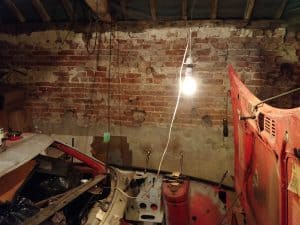 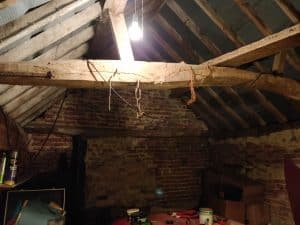 There’s a side door on the garage which is great, although it’s got it’s problems. Firstly there’s a huge gap between the door and the frame, which lets in the cold and the rain. Secondly, there’s only a slide bolt on the outside of the door, which isn’t exactly secure and also means there’s no way to keep the door shut from the inside. 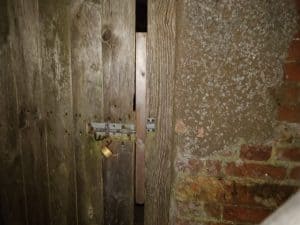 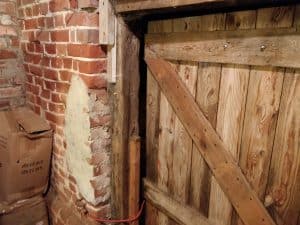 So my next projects:

Firstly, I’ve ordered a couple of reels of LED strip lights which I’ll install along the rafters and along the sides of the walls. This will hopefully give enough light, but more importantly it’ll be spread around the garage rather than just being in one spot – just the thing for banishing those shadows. It might make the garage look like a seedy nightclub, but we’ll see.

Secondly, I’ll run an extension lead over the rafter so I’ve got some power on the wall on the other side.

Thirdly, I’ll get some wood and build a frame around the doorway to seal that gap. I may get some foam or something to seal it a little better, but anything will be better than it is now. Then I’ll install a proper lock and handle on the door for some better security and so I can shut the door while I’m in there.

As for Rosie herself, I’ve been doing a bit of fiddling about on the second wing, that I started about three years ago(!). After a bit of fettling, I’m finally now more or less happy with the fit so now I just need to get the inside bits prepped and painted then it’s ready for welding on. We’re getting there – slowly!

I’ve given her a good look over and I’m happy to say that sitting in an often damp garage for the last few years hasn’t really done her much harm – there’s a few bare metal areas that have inevitably gone rusty, but it’s only surface rust that cleans off easily. Apart from the boot area which will need redoing (it’s been in primer for nearly a decade!), all the other work I’ve done has held up just fine. All the underside painting still looks freshly done.

So what’s been happening for the last few years?

Apart from a bit of time here and there where I’d get all fired up and wheel her out for some work, nothing really got done on here for the six years I was living at the old place. What happened? Did I get bored with the project? Not really.

There were two things going on: Firstly, the place we moved to had a large paddock and a garden that we never had before (we lived in a small flat before), so all of a sudden a lot of time was spent out dealing with the paddock, mowing, keeping chickens, having fires, barbecues, all that kind of thing. I loved what we had, but it took up a lot of time that I would otherwise have spent working on Rosie. Similarly, I was now commuting an hour each way so working in the evenings often wasn’t practical.

Secondly, things got maybe a little out of hand with the other cars in the family: at the point where we moved here, we had five cars! I was finding I was spending a lot of my precious time working on those, either just keeping them going or doing partial restorations on them. 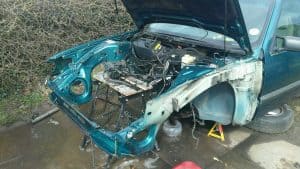 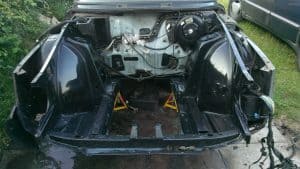 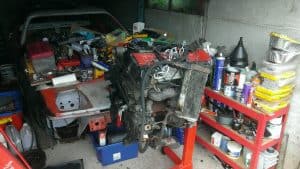 But things are changed now!

Our new place is a bit smaller and a bit easier to maintain (at least, Mrs Red is doing most of it!), we’ve now reduced the fleet down to just our two daily drivers plus the old green 9000 which I’ll be doing something with very soon (probably selling), plus I’m now in the process of setting up my own business which I’ll be able to mostly do from home – so no more long commutes and I now have the freedom to work when I want, within reason.

Not having to move a pile of stuff and drag Rosie out of the garage makes a big difference as well – it’s lovely just being able to go out there and potter about for an hour or so in the evening!