Having now fitted the first wing, I’ve now turned my attention to the other side.

First step was welding on the wing filler panel: 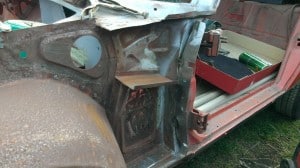 Then, after a bit of time spent making sure the wing fitted properly (easier said than done – as mentioned before, the new wheelarch is a really bad fit so it’s taken a lot of hammer work to get it sitting right), I gave the inner wing a clean up, rubbing off the worst of the surface rust, then giving it all a good wash down: 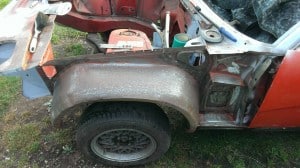 Then I applied the usual metal ready treatment, then a coat of POR-15: 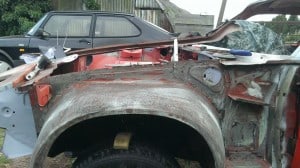 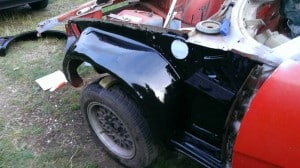 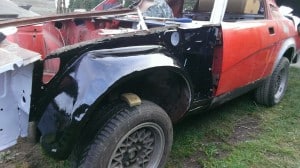 Starting to come together nicely!

With luck, next weekend I’ll be able to get the wing welded on, then I need to take the suspension and subframe out again to do the wheelarch & underside.

After that, it’s just the front panel to sort out and then the bodywork is more or less all back together again!