Now that the car is the right way round, I carried on with preparing the engine for removal and stripping everything out of the engine bay.

It took me about four hours, but it’s all more or less done now. 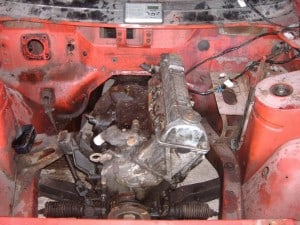 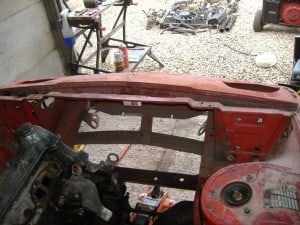 Apart from a couple of jubilee clips that were rusted solid (I hacksawed a couple of the hoses in the end – they were perished anyway, so no great loss), nothing gave me any particular problems. The inlet manifold was fun though – who decided it was a good idea to put a bolt where no spanner or socket can get to it properly? Time, patience and two different spanners got it out eventually though. After a bit of soaking with WD-40, even the exhaust manifold didn’t give me any problems – obviously I’d tried and failed at the start of the project, as I found a spanner wedged onto one of the bolts! Interestingly, half the exhaust bolts were missing, so either I’d managed to get them out before and forgotten about it, or they were never there to start with…

The only thing left in the engine bay (apart from the engine!) is the wiring loom; I’ve labelled all the connectors and just need to feed it through the wing from the front then shove it back through the bulkhead. 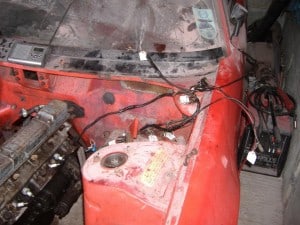 It’s a right mess in there, unsurprisingly – one of the first jobs once the engine is out will be to scrub it all clean. I will eventually be stripping the paint from there anyway, but in the meantime it’ll be nice to be able to work in there without getting covered in muck. The subframe and suspension are staying put for now, so I can keep the car mobile to pull her out of the garage as needed.

Obviously all this work left me with a large pile of parts:

Nearly all of that will be replaced – either because it’s no good for the V8 swap, or it’s just knackered. There are a few bits in there that are still good though, for example the Lumenition kit is almost unused, and the Kenlowe fan is still in great condition, as is the radiator. There’s also nothing wrong with the carbs that a clean up won’t sort out. I’ll go through it all at some point to see what I can reuse, what’s good enough to put on eBay, and what’s just rubbish that can be binned.

I’ll have to wait a couple of weeks to get the engine out, as that’s the next time I’ll get a free weekend to do it in. For now, I’ve still got to take the rest of the dashboard apart, as well as the wiring loom to label up and remove. If I get the time, I may also make a start on removing the wings.

It’s been good to get back on the spanners and do some mechanical stuff for a change; bodywork’s fine as far as it goes, but it can get tedious…