Well, as discussed before, I’ve decided to go for the V8 option. I bit the bullet a couple of days ago and won an ebay auction for an engine. I got it home today, and have already started stripping it.

As you’d expect from a £100 ebay engine, it’s looking a little rough: 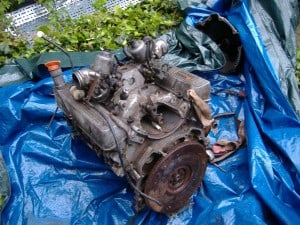 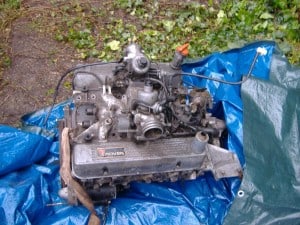 But apart from the obvious, it looks to be pretty solid. I’ve got as far as removing the manifold and stripping that apart, and so far everything looks fine – just a bit dirty! Of course, the real test will come later, when I pull the heads off. Whatever happens it’ll be having a rebuild anyway, but hopefully I won’t have to replace too much apart from the usual bits.

It also came with a gearbox, but I have no idea what sort it is! the gearknob says it’s a 4 speed, so I doubt it’ll be much good to me. However, I do already have a spare LT77 box for the purpose, so I’m hoping I can at least use the bellhousing from this one. We shall see.