I know I said before that the wheelarches were done, well I lied, it seems.

Due to a couple of little bubbles in the paintwork I decided it would be a good idea to strip the paint from the outer lips of the arches and see if anything needed work there, before I could declare the arches done. Although they turned out to be solid, there was a fair bit of filler all around. Grinding it down revealed some small areas of accident damage: 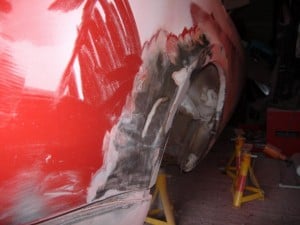 There was also a bit on the front edge – in line with the dent at the bottom of the rear edge, and also a previously filled dent in the rear sill. Looks like someone failed to spot a bollard or something! I’m not sure how that long vertical one was caused, it’s a pretty odd shape…
I could see a bit of what looked like rust under that one, so to set my mind at rest I ground all the filler out to get a look at the metal underneath. 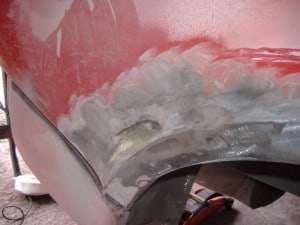 There was a bit of rust, but obviously treated when the dent was filled the first time round, so nothing to worry about. What I did find unusual was the large amount of filler going right the way back. So while I had the grinder handy, I stripped the paint all the way to the back of the panel: 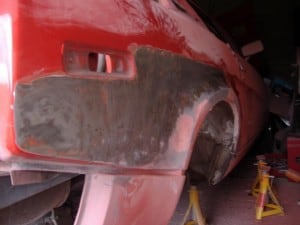 The rear wing had a 1mm or so skim of filler going right to the back, for no apparent reason.
I have to admit I’m confused here: the repair was very well done (this was the first time I’d even noticed it, which I think is as good a sign as any 🙂 ), but I can see no reason why the repairer felt the need to whack that much filler on. The only thing I could see was the dent had a small raised section; but seriously, that took me about ten seconds with a hammer to get rid of! Surely an easier option than mucking around with all that filler? The only other thing I could spot was a couple of small ripples near the bottom of the panel. No big deal though.
I’m also interested to know when that repair was done: I imagine that was before the car was resprayed, I can’t imagine someone putting in that amount of work and then just masking the light unit, rather than taking it off. If that’s the case, then the repair is quite old (IIRC the car was resprayed in the mid ’90s, as part of a previous restoration).

Similarly, the passenger side had a skim of filler all round for no good reason. Fortunately I didn’t find anything worth worrying about, save for a small (and previously filled) dent at the front. So that just got a quick spray with zinc primer and I can leave that alone. 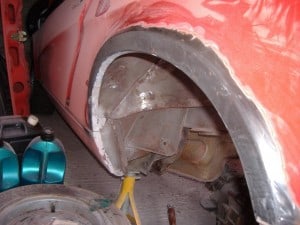 So, once again I’m back to filling and sanding!