The stripping down continued this week; to start with, the doors came out earlier on this week. No problems to report, except discovering the top hinge on the passenger door was close to falling off! There’s two pins in the hinge, the lower one was missing altogether and the top one was sticking halfway out. I’d seen the top pin but assumed it went all the way through so just thought it not sat in all the way. Good job it never came all the way out while I had the car operational – that could have been embarrassing!
The drivers door is a bit rusty along the bottom; while new doors are available they’re expensive so I think I’ll get a new skin and repair panel and repair this one. The passenger door is in great shape.
The doors are stripped out and stored in the back of the garage for now – I won’t need them again until I’m ready to put the new wings on and need them on to line everything up.

Today was spent removing the two wings. I’d spent a bit of time during the week pulling and prodding the offside one and had already got most of it off, mainly due to the fact it was mostly held on by rust and filler. I found some more fantastic filler bodges along the way: 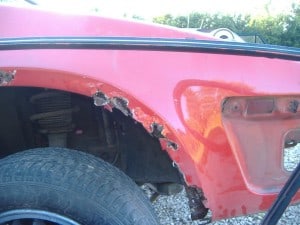 So that wing didn’t take long to come off.
Considering how rotten the wing was I was pleasantly surprised to find no real problems underneath, in fact it’s all very solid: 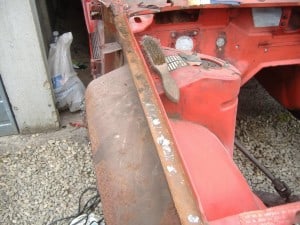 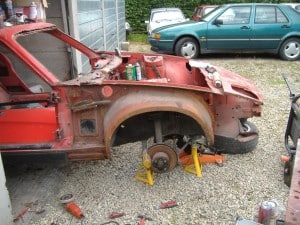 Apart from the lower front of the wheelarch: 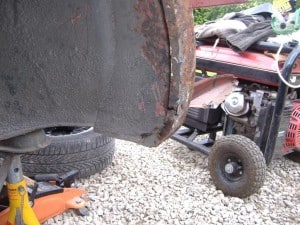 Which will require a patch welding in. Nothing too serious.

The nearside wing took a bit longer to get off, it seemed a bit more solid than the offside one. Unfortunately, the bodywork underneath wasn’t quite so good: 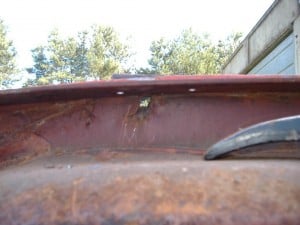 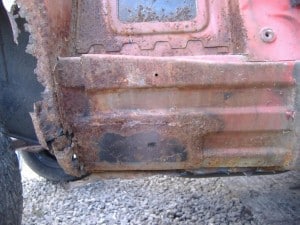 Going to need a proper repair panel to sort this side out.

The patch panel tack welded on the front of the sill worried me too; given that it was going rusty and the knowledge that whoever did the repairs on this before clearly wasn’t too bothered about removing old rust, I thought it would be a good idea to take it off. I wasn’t surprised to see what was underneath:

Good ‘repair’, that…
I’m mystified as to why they even bothered with that patch; it wasn’t really doing anything apart from going rusty. It wasn’t watertight and had pretty much no structural benefit. Oh well, it’s gone now. The remaining metal is OK and the sill as a whole is solid, so I’ll cut the rotten stuff out and do some patch panels for that. I’ll just try and do a better job!

Overall not too bad; a few patch panels here and there and one repair panel to buy and fit. Could have been a lot worse.

The other thing I looked at was the lower panel (the spoiler bit) – it looks like it took a knock at some point and got bent out of shape. Once I’d ground the masses of filler off, it wasn’t too bad. I think I’ll remove it and beat it back into shape; that’ll be easier than trying to do it on the car, and it’s only about six spot welds away from coming off. It doesn’t have to be perfect as I’ll be fitting a rally spoiler on the front, but I’d like it to at least be the right shape! Unfortunately the knock bent the brackets out of shape a bit so there’ll be a bit of panel beating to be done there as well.

The good thing is that I now know the full extent of what needs doing. It’s not great but it’s not horrific either.